This online meeting discussed Prof. Abbas Vali’s recently published book, The Forgotten Years of Kurdish Nationalism in Iran (Palgrave, 2019). Prof. Vali is a Kurd from Iran, had a long academic career, and worked for universities in the UK, Kurdistan Region of Iraq, and Turkey. Dr Djene Rhys Bajalan was the moderator of the meeting and also acted as a discussant and contributed to the discussion with his questions and comments. Dr Bajalan is a historian of the Middle East specializing in the rise of nationalism and the evolution of the Kurdish question, and he is currently an Assistant Professor of History at Missouri State University.

Dr Bajalan introduced Prof. Vali and highlighted some of his contributions to the study of Kurdish politics and history. Prof. Vali started by briefly discussing his academic works and how his latest book is situated within his overall scholarship. He said The Forgotten Years of Kurdish Nationalism in Iran was a sequel to an earlier book, The Kurds and the State in Iran (I.B. Tauris, 2011). Both of these books are a part of a larger project on the history of Kurdish nationalism in Iranian Kurdistan. Prof. Vali is currently writing the third book of this trilogy on Kurdish nationalism in Iran, which he hopes to publish in two years.

Prof. Vali mentioned that the book is titled The Forgotten Years of Kurdish Nationalism in Iran because most books on Iran or Kurdish nationalism focus on the earlier phase of the establishment of a Kurdish republic in Mahabad (January-December 1946). There are scholarly works that focus on the post-1979 phase that offer some reflections on the years between 1946 and 1979 but does not cover the developments in sufficient depth. Hence, hardly anything significant has been written about the period from 1946 to 1979, and despite its importance, very few people have specialist knowledge of that period of Iranian Kurdish history. He mentioned that there were mainly two dominant accounts available: the biographies or autobiographies of people who played an essential role in the period from 1946 to 1979; and the accounts written by the political parties. The personal reflections and biographies offer intensely subjective reflections on the roles and experiences of the main actors. The accounts by political parties are ideological and reflections of the views of political parties representing a particular political stance. In writing the book, Prof. Vali said he tried to offer an academic account of that period and fill some gaps and signify the importance of that period.

Prof. Vali mentioned that the book starts with the restoration period after the collapse of the Kurdish republic in Mahabad and the suppression of freedoms and the nascent Kurdish nationalism in Iranian Kurdistan. Prof. Vali thinks Kurdish nationalism is a modern phenomenon with a history of barely 130 years. He traces the birth of Kurdish nationalism in Iran to the 1930s. The opening provided to the Kurds after the 1941 Anglo-Soviet occupation of Iran was a crucial factor in its development. This opening lasted until 1946. The period of restoration that followed this phase resulted in the demise of Kurdish nationalism in Iran. This period involved the imposition of sovereign culture and power that suppressed the Kurdish language, culture, and identity. However, restoration was interrupted by the domestic developments in Iran, and it was not a linear process. The crisis triggered by the nationalization of oil ended in the coup d’état of August 1953. There was an attempt at revival of Kurdish nationalist politics in 1951-53, but on a much smaller scale compared to that experienced during the republic. During this period, repression continued, but it was less intense.

Prof. Vali said that after the coup, a new phase of Kurdish nationalism started in Iranian Kurdistan and mentioned that his focus in the book was on the Mukriyan region, which is the Northern sector of Iranian Kurdistan and the locus of Kurdish nationalism in Iran at the time. After the coup, the region faced an entirely new development, which was internal to the very reason why the coup happened: the inefficiency of the state and the apparatuses of domination and order. This was a very dark period and witnessed much suppression of political parties, especially communist parties and ethnic organizations and groupings. The coup was made by the Americans and British and resulted in the reinstatement of the Shah. However, Prof. Vali argued that the coup d’état was not of entirely foreign making as the bulk of the military and merchant class were in favour, and also some social groups in Iran were supportive of it. Hence, the restoration of the monarchy had internal support.

The period witnessed a change in the conduct of the state through the rationalization of repression and the new technologies of repression, which resulted in a reaction from the Kurdish nationalists and forced them to organize themselves in exile. They went to exile to survive, and their organization in exile opened the way for armed struggle. The main Kurdish nationalist party, the Kurdistan Democratic Party of Iran (KDPI), was the first organization that adopted the strategy of armed struggle against Iran in 1964, and it was 3-4 years before the advent of guerrilla movement in Iran.

Prof. Vali mentioned that he studies history from a genealogical perspective rather than through a historicist perspective. He emphasized the dialectic of suppression and resistance in shaping the course of Kurdish nationalism in Iran. He also reflected on the genealogy of violence in Kurdistan and asked whether it should be attributed to specific historical political actors or seen as a process in which multiplicity of actors are participants. He mentioned that in this book, he tried to break out of the circular argument of means and ends of violence and tried to move towards a historical understanding of violence in the context of Kurdish politics in Rojhelat (Iranian Kurdistan).

Dr Bajalan highlighted some of the book’s contributions and asked Prof. Vali to explain the primary reason more fully behind why the period from 1946 to 1979 is poorly understood in the broader context of Kurdish nationalism? The event continued with Prof. Vali’s response to the question and further questions from Dr Bajalan and the audience. 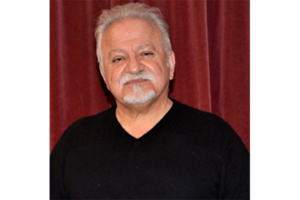 Professor Abbas Vali is from Mahabad in the Kurdish region in Iran. He began his academic career in 1986 at the University Wales at Swansea where he taught Political Theory and Middle Eastern Politics before moving to Erbil to establish a new university on the request of the head of the KRG in 2005. He was the founding president of the University of Kurdistan in Hewler for three years. He left Erbil in 2008 due to disagreements with the government over the management of the university. Abbas then moved to Istanbul where he held the chair of Modern Social and political thought at the Department of Sociology, Bogazici University in Istanbul (2008-2017). He has authored five books and more than 40 articles in academic journals. His writings include Pre-Capitalist Iran: A Theoretical History (I.B. Tauris, 1993); Essays on the Origins of Kurdish Nationalism (Mazda 2003); Kurds and the State in Iran: The Making of Kurdish Identity (I. B. Tauris 2012); The Forgotten Years of Kurdish Nationalism in Iran, (Palgrave-Macmillan 2019). He is currently working on two new books: Reconstituting the Kurdish Question: Power and Resistance in the Contemporary Kurdistan (2022) and Iran: The Republic of Violence (2023).

Dr Djene Rhys Bajalan (Assistant Professor, Missouri State University) is a historian of the Middle East specializing the rise of nationalism and the evolution of the Kurdish question. He completed his undergraduate degree in history and politics at the School of Oriental and African Studies, holds an MSc in Nationalism and Ethnicity from the London School of Economics, an MA in History from Istanbul Bilgi University and a DPhil in Oriental Studies from the University of Oxford. He is the author of “Jön Kürtler: Birinci Dünya Savasi’ndan Önce Kürt Hareketi 1898-1914” (The Young Kurds: The Kurdish movement before the First World War)(Avesta, 2010) and co-editor of “Studies in Kurdish History: Empire, Ethnic and Islam” (Routledge, 2015). In addition to extensive research experience in both the British and Ottoman archives, Dr. Bajalan has taught both Middle Eastern and World history in a variety of different institutions, including at the University of Oxford, Istanbul Bilgi University, and the American University of Iraq – Sulaimani. Dr. Bajalan also serves on the editorial board of the journal Kurdish Studies and publications, such as Turkeyscope, Jacobin, OpenDemocracy and Jadaliyya have featured his commentary on present-day Middle Eastern affairs.