This event featured a discussion with Johannes de Jong, who has been working since 2011 for Sallux, which is a think tank associated with the European Christian Political Movement. He has been focusing on the economy and international relations and since 2014, he has been working intensively with the Kurds, Syriac-Assyrians and Yezidis of Syria and Iraq. Sallux has been a registered European political foundation and has been closely following Turkey’s aggressive behaviour in Northern Iraq and North-Eastern Syria. Nilüfer Koç moderated the session and began with a brief background on the discussion topic and introducing De Jong.

Koç detailed Turkey’s crimes against humanity, war crimes and the violations of international law that it has been committing by occupying the Kurdish city of Afrin in North-Western Syria and the permanent airstrikes in the Kurdistan Region of Iraq (KRI). Furthermore, she highlighted Turkey’s interventions in the conflict between Azerbaijan and Armenia and Turkey’s role in trying to use the European countries against each other on the East Mediterranean. The question was: How has Turkey been able to commit such acts without being charged for the crimes that it has been committing?

De Jong, regarding his publication, stated that the issues raised in Koç’s introduction were the reasons behind the creation of the report. He mentioned it is a divisive issue for the European Parliament and the US Congress. There was a big divide between the elected politicians and the unelected officials, such as ministries of foreign affairs, diplomats and ambassadors. De Jong pointed out that the elected are touched by the developments taking place, but the unelected have a different agenda. De Jong believes that activists can lobby the elected officials to push for changing the system. The unelected officials are not touched by the same threats and dangers as most ordinary people on the ground and therefore have different agendas and interests.

For this reason, he mentioned that his publication firstly focuses on explaining the context of Turkey’s aggressive actions since 2013. Secondly, the connection between the events. Finally, how elected representatives could change this. He stated that Turkey’s NATO membership currently offers unconditional protection, and the publication suggests that this protection should become conditional and dependant on Turkey easing its aggression abroad and home. He explored whether the elected officials could use legal means to push for removing Turkey from NATO and said that it was not legally possible and that sanctions would require interests to come into play. There was an added problem that these sanctions would be postponed and taxes evaded.

Koç asked the critical question of whether NATO had the mechanisms to stop Turkey’s aggressive behaviour. Here De Jong pointed out that this publication contained NATO’s hidden mechanism to be Article 5 of the NATO treaty. He elaborated by stating that Article 5 of the NATO treaty was not unconditional. De Jong suggested that NATO member states should clarify to Turkey that if it continued its aggressive behaviour in the region and further undermined European security, then if attacked, they would not be automatically obliged to defend Turkey because it is a NATO member state. He further elaborated on this statement by stating that Turkey would become vulnerable, which would help European security. To get the NATO member states’ protection back, Turkey would have to end its aggression abroad.

De Jong pointed out that NATO is not one single body but is composed of all the NATO member states. He further pointed out that in NATO meetings, the foreign affairs ministers of each member states have several issues to keep in mind and that they may not represent all the people of their countries. This meant that the Turkish issue is unlikely to be raised. However, he mentioned that the publication bypasses this system by targeting the elected officials. They would not wait for other member states to discuss the issue but raise it themselves. This would create the domino effect in national media in different countries, and there would be debates in parliaments of NATO member states on whether they should defend Turkey or not. This format, De Jong said, would build pressure from the ground upwards. He stated that building pressure would cause NATO states’ parliaments to listen to the people because otherwise, they would not be re-elected. By suggesting this approach, the publication points out a successful path that can be taken against Turkish aggression. De Jong used the Netherlands as an example, where the terrorism documents that had been leaked from the national coordinator suggests Turkey is undermining Netherlands’ security. This clearly was not something to be ignored any more, so he suggested that activists could seize that opportunity to stop the Dutch government from protecting Turkey.

The audience also participated in the discussion by presenting questions to De Jong. One crucial question was whether the S400 missiles provided by the Russians were produced against NATO?

De Jong pointed out that the publication also considered Russia if Turkey’s protection is removed. He highlighted that the publication suggested that if Turkey had a problem with Russia, it would not be a concern for European security. On this basis, De Jong posed the question of what would happen if Turkey would not be a concern for Europe’s security? He answered this question with the statement that Turkey is no longer defending Europe but undermining it, and the publication asks why we would defend one threat with another threat? In dealing with this question, he stated that his publication had outlined an alternative strategy for Europe and the US to build a more secure Southern neighbourhood environment.

The event ended with De Jong’s statement about the need to operate within the legal and political possibilities. He also stated that the Turkish problem is not with the leader but that it is the Turkish regime’s ideology. Furthermore, he said that in the last few Turkish elections, Erdogan managed to gain the majority vote from the Turks abroad (Europe). This suggested Turkey’s explicit agenda is deliberately blocking integration and stimulating extremism in Turkish communities abroad. Finally, De Jong urged activists to read and spread the publication to the likeminded people and elected people in parliaments to gain more attention and support the efforts to stop Turkey’s aggressive behaviour in the region. 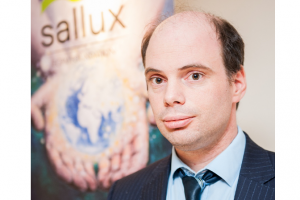 Johannes de Jong has been working for Sallux since its start in 2011. He has been focusing on economy and international relations with a specific attention to those who are quickly overlooked in the global economy and geopolitics. Since 2014 he has intensively worked with the Kurds, Syriac-Assyrians and Yazidis of Syria and Iraq with a specific focus on the developments in northern Syria.

Sallux (www.sallux.eu) is a recognized and registered European political foundation. They are formally linked to the European Christian Political Movement, and serve as a platform of like-minded thinktanks all over Europe. They are focused on dealing with the Turkish aggression, and have been involved in the situation of Northern Iraq and NE Syria since 2014, working with the relevant parties on the ground to establish connections between them and relevant policy makers and influencers in the western world. 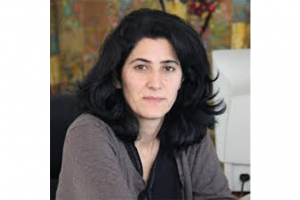 Ms. Nilüfer Koç, born in Ardahan, northern Kurdistan, is member of the Executive Council and spokesperson for the Commission on Foreign Relations of the Kurdistan National Congress (KNK).Her current primary political focus is the improvement of national dialogue amongst political parties and civil society organisations in Kurdistan, and she spent most of the period from 2013 to 2018 in southern Kurdistan (Kurdistan-Iraq) and Rojava/North East Syria. Parallel to national unity efforts, Ms. Koç is also active in the international arena in raising awareness of the right to self-determination for the Kurdish people and all ethnic and religious components of Kurdistan, and she is interested and engaged in the active and autonomous participation of women in all fields of society and politics. Ms. Koç came to Germany in 1976 as a child of Kurdish migrant workers and studied Biology and Political Science at the University of Bremen.