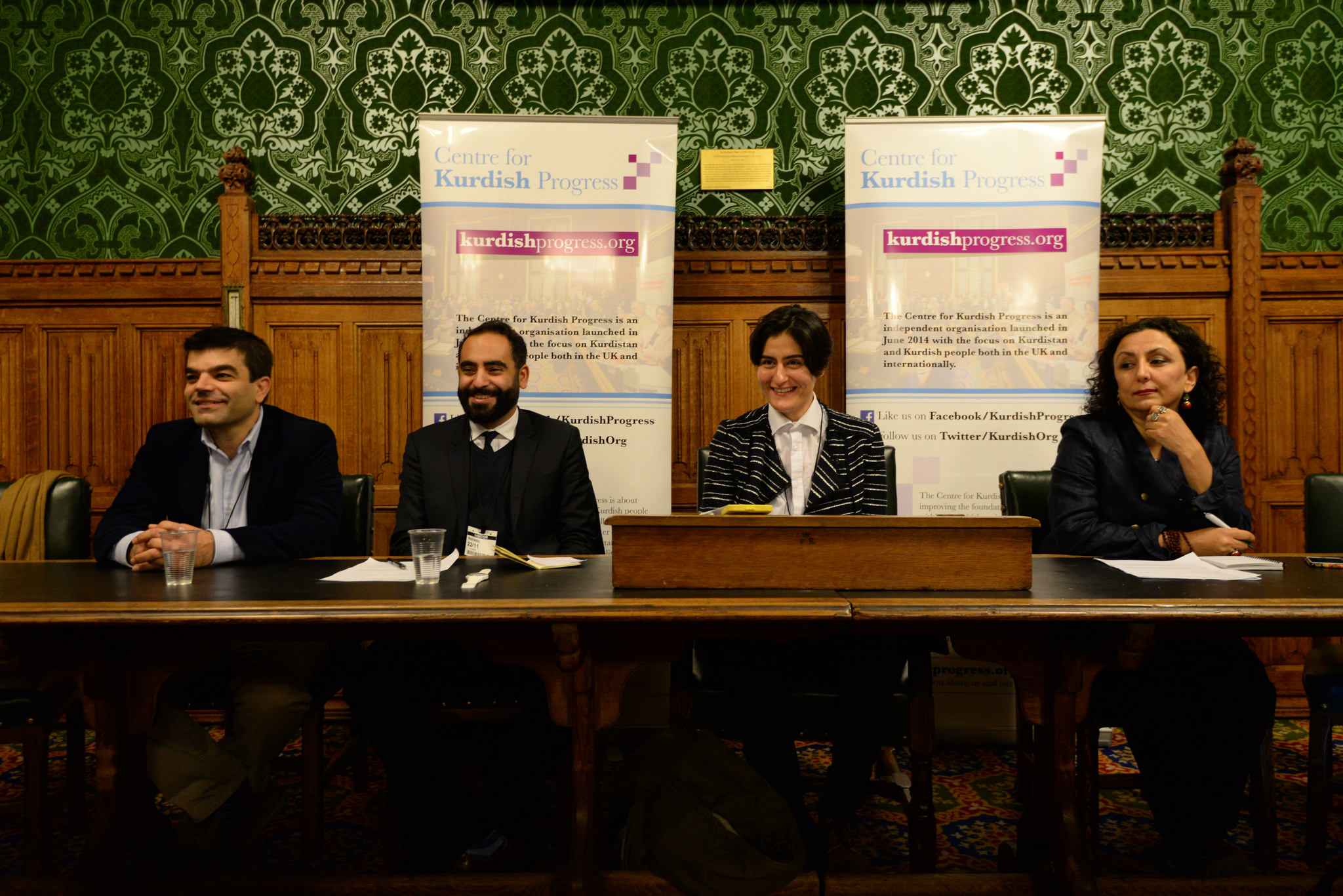 Chair Shie Raouf opened the debate, thanking Kurdish Progress for organising the event and outlining what has happened in the KRI (Kurdistan Region in Iraq) since the independence referendum of 25th September. She stated that the “joy of the referendum was short lived”, citing the air blockade and the loss of Kirkuk.

First up, Dr Renad Mansour of Chatham House began by saying that the referendum was a “miscalculation” and that there is now a need to “return to pragmatism”. Dr Mansour spoke about how Iran has deeply penetrated the Iraqi state, and said that the Kurdistan Regional Government (KRG) has overestimated US support going into the referendum. He talked about the differences between the Maliki and Abadi governments, and that Maliki’s side of politics is trying to exert pressure on Abadi. Mansour recommended the KRG now goes about “building a state first” before returning to the idea of winning independence. That would involve rooting out corruption, developing and diversifying the economy, and firming up existing institutions. He also recommended Kurdish politicians returned to Baghdad to exert influence within the Iraqi state.

Shwan Zulal spoke about how the oil price crash ruined all chanced of building a feasible national economy. Combined with budgetary issues with Baghdad, this has led to immense pressures on the KRG in the form of debt and crashing wages. Oil revenue has been cut in half in recent years. The threat of the pipeline being cut since the referendum has also undermined the KRI’s economy. Mr Zulal predicted that by early 2018, the KRG could face complete bankruptcy unless Erbil and Baghdad get back around the negotiation table and stake out a compromise solution.

Houzan Mahmoud opened her speech by commenting on the UK Parliament – that she was speaking from the “heart of the beast”, the parliament of the imperial power that carved up the Middle East in the first place, establishing the arbitrary borders that exist to this day and cause so many issues. She talked about the history of genocide, language rights and boarders in the Middle East, and her family’s history in the Peshmerga. Ms Mahmoud said that the language of the Iraqi state hasn’t changed since Saddam Hussein’s brutal dictatorship. She was critical of the KRG’s record on women’s rights, nepotism and so on, but that she voted in favour of independence.

In the Q & A, we heard questions about the curse of the oil economy, the KRG’s relationship with Turkey (it owes Turkey $4bn), Iran’s deepening influence in Iraq, and repeated Western betrayal of the Kurds.

The views of our speakers do not necessarily represent the views of the Centre for Kurdish Progress.

Renad Mansour is an Academy Fellow at the Middle East and North Africa Programme at Chatham House. Prior to joining Chatham House, Renad was an El-Erian Fellow at the Carnegie Middle East Centre, where he examined Iraq, Iran and Kurdish affairs. Renad is also a Guest Lecturer at the LSE, where he teaches a MSc course on the International Relations of the Middle East. He is a research fellow at the Cambridge Security Initiative based at Cambridge University, where he held positions as lecturer and supervisor at the faculty of politics. He received his PhD from Pembroke College, Cambridge.

Shwan Zulal is Managing Director at Carduchi & Research fellow at the European Centre for Energy and Resource Security (EUCERS) at King’s College. He advises clients interested in expanding their business into the emerging markets and developing region of Kurdistan/Iraq. Zulal is also managing editor of Carduchi Kurdistan Energy and Politics weekly. The publication covers the nuance of Kurdish politics in relation with oil and gas sector.

Houzan Mahmoud is a women’s rights campaigner, public lecturer and co-founder of Culture Project, She has an MA in Gender Studies from SOAS-London University. Her articles were published in UK publications including The Independent and The Guardian, The Tribune, The New Statesman and others. Houzan led many campaigns internationally, including campaigns against the rape and abduction of women in Iraq, and against the imposition of Islamic sharia law in Kurdistan and Iraqi constitution. She led many other campaigns around the world against so called honour killings, gender based violence and against violation of freedom of expression. She is winner of 2016 Emma Humphrey’s Memorial Award.